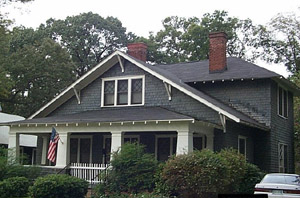 The Heritage Neighborhood is located in the West Park area to the northwest of downtown Greenville. City Council designated the neighborhood as a local preservation overlay in December 2001. The architecture of the area is a collage of various styles. The most prominent is the bungalow style, with peak construction occurring during the 1920's. There are approximately 126 structures in the neighborhood.

The neighborhood was subdivided by William Choice Cleveland who purchased the land from Dr. S. S. Marshall. Marshall had operated a large vineyard in the area of present day Wilton Street. A dairy just south of the neighborhood also operated into the 20th century.

Upon purchasing the land, Cleveland subdivided it in 1909, although little construction was done immediately. For a few years, the agricultural endeavors coexisted with the coming residential development. In addition to the dairy, there were working vineyards in the neighborhood where many residents also worked. The proximity to the Women's College also provided jobs to the local residents.

The nearby St. George Greek Orthodox Cathedral is the source of the cultural history of the area. The church was organized in 1931 in a home south of the neighborhood and made the area an attractive settlement to Greek immigrants and later to families of Greek origin.